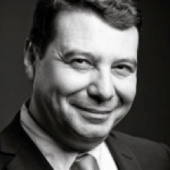 Before becoming an executive coach and trainer, Nicolas founded both a consulting firm and an informations systems company in the 1990s, for which he was the General Manager. After having sold his companies, he integrated an international marketing and consulting group in 2003 and took on the role of Operations Director.

He is currently involved in several consulting projects, the design and facilitation of training seminars, and executive business and management coaching.

Nicolas is certified in many coaching approaches and tools (TMP, Talents, MBTI…), including the systemic approach developed by Jacques-Antoine Malarewicz.